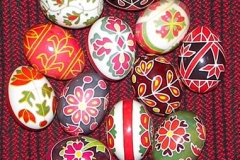 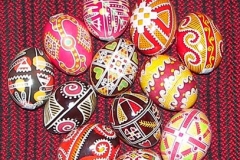 When speaking of Ukrainian Easter eggs-“pysanky”, they are said to be “written”, as opposed to being “painted” or “decorated”.  This is because the ornamentation is most commonly applied with a writing tool (called “kistka” or “pysal’tse”) through which melted beeswax flows in the same manner as ink flows through a fountain pen.  (The very name “pysanka” is derived from this technique and comes from the Ukrainian verb “pysaty”, meaning “to write”.)

To create a “pysanka”, a fresh, clean chicken egg is cradled in ones hand and the preliminary lines of the predetermined pattern are laid out – “written” – in wax; according to the principles of the wax-resist process (also known as “batik”), the wax seals in the white color of the egg shell, protecting it from the various dye baths that are to follow.  When all areas that are to remain white have been covered in wax, the egg is submerged in a bath of the next darker color, which covers all areas of the white egg shell that have not been protected with wax.  The progression of colors proceeds from the lightest (usually the white of the egg shell) to the darkest, so that each subsequent color completely covers the preceding.  The color scheme for a typical multi-colored “pysanka” is: white (the color of the egg shell) – yellow – green (applied topically, as it is a very dense color that might spoil the subsequent dyes) – orange – red, with brick-red, brown or black being the final background color.

After each dye bath, the areas that are to remain that color are covered in wax, and then dipped into the next darker dye, with the process repeated until the egg has been dyed in each color and the appropriate areas have been covered with wax.  The final color is always the darkest, and is one that provides a background that effectively contrasts with all of the other previously utilized colors.

When the final (darkest) color has been applied, the egg is carefully heated so as to melt the various layers of wax so that it may be removed easily with a soft cloth.  As the wax is being removed, the colorful patterns of the applied ornamentation are revealed.  With the wax fully removed, the multicolored pattern of the completed “pysanka” is visible in all of its intricate glory.

The Ukrainian Easter-egg, known in Ukrainian as “pysanka” (singular; from the Ukrainian verb “pysaty”, meaning “to write”), is one of the most interesting and most unique forms of Ukrainian decorative art.  Its history dates back to the distant past of the Ukrainian people and is connected with the pagan ritual of praising the coming of Spring.

The eggs are “written” using different techniques, and the various ornaments and motifs vividly reflect the high level of artistic prowess of the Ukrainian people; they tell about the people’s ability to perceive nature, depicting it in its various forms and creating brilliant geometrical, plant and animal ornaments.

The most widespread motifs used to ornament Ukrainian “pysanky” (plural) are forms of cosmological solarium signs with a symbolic image of the sun serving as the basis, variations of which were numerous.  Of the motifs used in Halychyna (Galicia) – esp. among the Lemkos and Boikos, “stars” and “sun” are depicted in the form of laconic rosettes, while in the region of Western Podillya they resemble delicate ruby stars or represent a relatively realistic image of the Spring sun.

One of the oldest variants of solar motifs that have been passed down to us through the centuries is that of “pavuchky” (plural, meaning “spiders”), from Eastern Polissya, and the motifs widespread throughout all of Ukraine and known as “krutorohy” (plural, meaning “twisted horns).

Depictions of “goddess” and “princess” must also be considered as ancient and are probably a continuation of the traditional representation by our ancestors of the Grand Goddess (known also as “Berehynia”, “Mokosh”, “Zhyva”, etc.); in Ukrainian mythology she was always a symbol of rejuvenation and/or fertility – the mother of all things living and existing on earth.

In the Ukrainian “pysanka”, as in all Ukrainian applied art, there are ornaments which were formed during the Bronze Age (the so-called “Trypillian” Culture); for example, undulating lines known as the “Ukrainian meander”, which is now widespread in the Hutsul region and also found in the Volyn, Podillya, Poltava, Northern Bukovyna, Transcarpathian and Kherson Regions.

The extremely artistic compositions and color schemes found on traditional Ukrainian “pysanky” attract much attention, and are especially valued for their masterful representations of nature, originality, and perfection of color combinations, and are considered miniature masterpieces in their own right.  “Pysanky” of the Hutsul Region evoke special interest, as they embody the artist’s refined creative taste and precision, or even subtlety, of execution.

The Ukrainian Easter eggs-“pysanky” on exhibit at the Ukrainian Museum Archives are the work of Ohio-based artist Tanya Osadca*, who has generously donated them to the UMA’s collection.  Each Easter egg-“pysanka” created by Ms. Osadca is a replica of an original antique ”pysanka” that has been documented as originating from a specific ethno-historic region of Ukraine.

Tanya Osadca, born in 1926 in Ukraine, is married and the mother of two children.  She immigrated to the United States in 1950 and has lived in Ohio for the past 25+ years.  She was educated at the University of Innsbruck, Austria; University of Erlangen, Germany; and Kent State University, where she majored in Art History.

As a child, Ms. Osadca learned to write Ukrainian Easter eggs–“pysanky”from her mother, and maintained her skills after arriving in the United States.  Since 1973, she has displayed her “pysanky” in art shows across the country and researched the topic thoroughly, building a collection of over 2,000 eggs – her own and others’ – from Ukraine and surrounding countries.

Her primary goals are collecting and preserving original Ukrainian designs, and researching the many techniques, ornamentation, customs and legends involving “pysanky”.

“My work is an extension of my love and concern for an ancient, ritualistic folk art that was becoming extinct in Ukraine due to Soviet suppression.  I strive to preserve and reconstruct the old ornamentation and symbolic meanings of ‘pysanky’”, explains Ms. Osadca.